We have a lot to be proud of!

More than 45 years in the field of crane production! 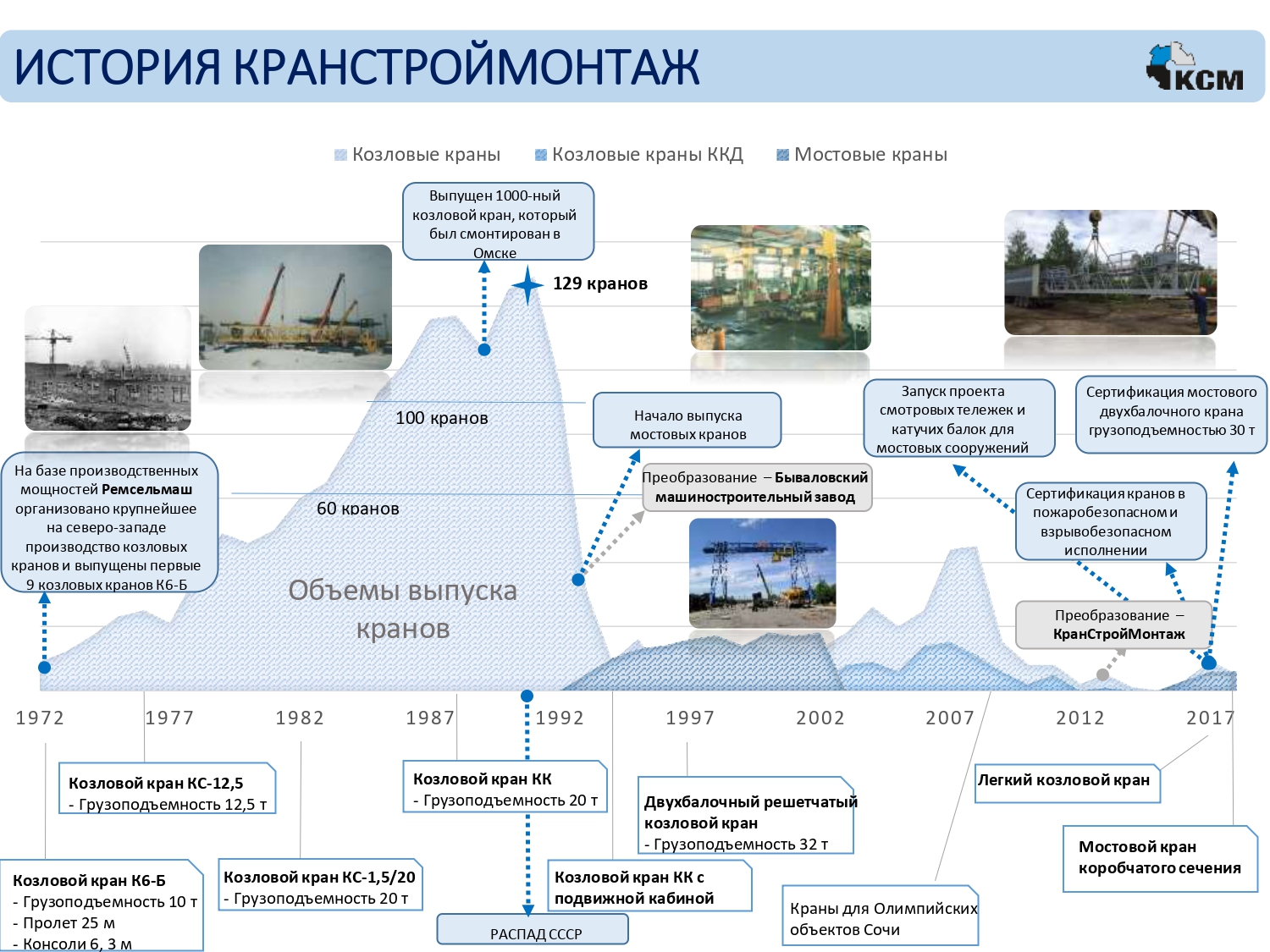 The history of crane production dates back to 1972. This was the year when the largest production of gantry cranes in the northwest was organized on the basis of the RemSelMash production facilities in Vologda and the first 9 K6-B gantry cranes were produced.

Production of a new line of KS-12.5 cranes has begun, due to which the load capacity has been increased to 12.5 tons.

Production of KS-12.5/20 cranes has begun - the load capacity has been increased to 20 tons.

The plant launched production of KK-16/20 cranes with a maximum load capacity of 20 tons.

The main difference - the bridge has a constant load capacity, providing it also over the entire cantilever length. In addition, it became possible to implement a hook turning mechanism controlled from the cab, which allowed to reduce labor costs of sling operators and reduce the risk of injuries at work.

The plant was increasing production volumes every year and in 1989 the 1000th gantry crane was produced; it was assembled in Omsk.

The plant sought to expand the product range and mastered the production of overhead cranes in 1993.

Production of KK cranes with a mobile cabin has been mastered.

This design helped to increase the crane load capacity to 50 tons, while maintaining a high level of reliability and durability of the structure.

The scope of crane application is expanding. Cranes are produced for almost any industry - railway container transshipment, metallurgy, chemical industry, underground tunnel construction, and many others.

2009 – cranes for the Olympic facilities in Sochi.

Special gantry cranes were manufactured and handed over to the customer for the construction of tunnel arches for new roads in Sochi during preparation for the 2014 Olympics.

In 2016, we developed a lightweight gantry crane project. Its distinctive feature was the use of a longitudinal I-beam and lightweight supports instead of the lattice structure, which significantly reduced the amount of investments in our customers' projects.

2017 – certification of explosion-proof design, double-girder overhead cranes with a load capacity of up to 30 tons and launch of the inspection trolley project.

This year was marked by three innovations at once:

·      we launched the project of inspection trolleys and roller beams for bridge structures, manufactured and delivered the first batches of products to the customer;

·      we certified double-girder overhead cranes with a load capacity of up to 30 tons;

·      we certified overhead cranes in fire- and explosion-proof designs to be used in the nuclear, oil refining and chemical industries.

Results of our work:

from West to East - from Dzerzhinsk (Belarus) to Chita;

from North to South - from Murmansk to Balkanabat (Uzbekistan).

We continue to develop!

We are confident about the future!